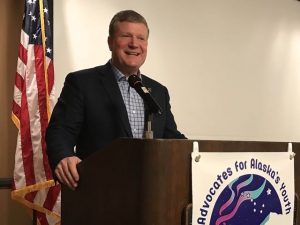 I was blessed to have parents who were lifelong educators here in Alaska. In 1936, my father was born in Yunan Province, China. He survived the Second Sino-Japanese war, but carried with him life-altering experiences of captivity and loss that profoundly impacted his approach to education. In the 1960s and early 70s, we lived along the shores of Lake Iliamna, where my parents taught school in beautiful Newhalen village. My father commented more than once that he recognized a deep trauma-related sorrow in the area, similar to that of the Chinese people when their children and culture were taken from them by force. He is gone now, but his belief that education must derive from the culture, not brought to it, remains with me. Recent Alaska education test scores urge us in this direction.

In 2015, the Alaska Department of Education & Early Development (DEED) introduced a more rigorous statewide measurement of academic progress in English language arts and mathematics called Alaska Measures of Progress (AMP). This standardized test was administered to grades 3 – 10 statewide. The results of these test were disappointing with only 1/3 of all Alaska students meeting minimum proficiency standards in English and Math.

In some of the larger rural school districts, where many of the students speak English as a second language, the percentage of students meeting minimum standards was in the single digits. This is not surprising. When language is a barrier, how does a child get to ask the spontaneous, curious questions that lead to a deeper understanding of the subject matter?

There was considerable speculation from various groups about the validity of the AMP test and whether it should be used as baseline data for making determinations of whether our public education mission of “an excellent education for every student every day” was being realized, particularly in rural Alaska. In 2016 the AMP test was canceled.

In 2017, DEED introduced the Performance Evaluation for Alaska’s Schools (PEAKS) standardized test assessments for the first time. Like AMP, PEAKS was aligned with the Alaska English language arts and mathematics standards. So how did we do with the new test? Not good. According to DEED, more than 60% of students who took the test failed to meet minimum grade-level standards in English and Math; the trend of our larger rural school districts having the poorest outcomes continues under PEAKS.

In the Northwest Arctic Borough School District, just 11% of students scored proficient in English language arts, and 8 percent in math. In the Lower Kuskokwim School District, only 7% of students scored proficient in English, and 7% in math. We will need more years of testing data to see trends, but it is noteworthy that both the 2015 and 2017 test scores mirror Alaska’s performance on the National Assessment of Educational Progress, a national math and reading standardized test.

Alaska Education Commissioner Michael Johnson and other education leaders have said these scores are a wake-up call. Commissioner Johnson further said, “we have to be dissatisfied with the current results that we’re getting.”

The good news is that Alaska is dissatisfied. We now know our education system needs a new beginning. We have outstanding teachers and committed school boards and support staff, but the challenge is much deeper. The structure of education in Alaska, particularly in our rural districts, needs to be fundamentally reviewed for process integrity.

To this end, DEED initiated a robust statewide effort called Alaska’s Education Challenge to identify top priorities for transformational change in Alaska’s public education system. In the spring of 2017, a workgroup formed that included hundreds of stakeholders – parents, educators, students, school board members, teacher union representatives, and Tribes and state government officials who worked this past year with great resolve to find the best way forward to address our student achievement gaps.

Through a public input process, five priorities for Alaska’s public education system were identified by the state board of education: Improve Student Learning, Ensure Excellent Educators, Modernize the Education System, Inspire Tribal and Community Ownership, and Promote Safety and Well-being.

I had the privilege of serving on the Tribal & Community Ownership committee with many outstanding statewide leaders in education, Native leaders from throughout the state, teachers, parents and school board members. For more than seven months our committee heard from diverse areas around the state about how we could increase Tribal and community ownership of education. The recurrent theme we heard is that our education system struggles to be responsive to rural communities where people often feel their voices are not heard and that their culture is irrelevant. Subsequently, they have little ownership of the education system.

Yesterday I had a student from Point Lay ask me, “what are you doing to help our culture and traditions in my village school?” I said, “All I can, all I can.” Nothing asked about money, math, science, teachers or sports. Just worried about his culture. Until we identify the highest value in the life of these communities, with respect to education, we begin at no beginning and we work to no end. The preservation of our indigenous cultures is as important as breathing; we need to understand that.

Alaska Natives want to regain the ability to teach their own children in their own ways. We know today this is fundamental to the self-determination of any people.

And we know that education can’t survive without a strong partnership between parents, schools, and communities. The Tribal & Community Ownership committee looked to the experience of other states who are working to improve the education of indigenous peoples through consensus-based education partnerships that develop a long-range collective vision of Native success that is defined by the community.

The result of this review is that the Tribal and Community Ownership committee recommended to the state board of education that the state create the option for self-governance compacting for the delivery of education between the State of Alaska and Tribes or tribally-empowered Alaska Native organizations.

The compacts would be voluntary in nature, only applying to Tribes who are ready and wish to form a compact with the state of Alaska for education services. The structure of these agreements would allow for culture focused values to be integrated with curriculum in order to produce the vision of success defined by the Tribal community.

This is not a new idea for our state. Alaska has compacted with Tribes for more than 20 years, beginning with healthcare (now known as the Alaska Native Tribal Health Consortium – the most technologically advanced and highest quality healthcare delivery system in our state today, by far), then tribal courts for misdemeanor and family law matters, and more recently for children’s services. For those that would fear we are going out on a limb by providing more tribal control of education, I would respond that this has been the official policy of the United States government for over 40 years.

The Act states in part “To provide maximum Indian participation in the government and education of the Indian people; to establish a program of assistance to upgrade Indian education; to support the right of Indian citizens to control their own educational activities.”

The congressional findings made the intent of the act explicitly clear – Congress finds that true self-determination in any society of people is dependent upon an educational process which will ensure the development of qualified people to fulfill meaningful leadership roles (single percentile scores on knowledge assessment tests do not bode well for filling meaningful leadership roles); the federal responsibility for and assistance to education of Indian children has not affected the desired level of educational achievement or created the diverse opportunities in personal satisfaction which education can and should provide; and parental and community control of the educational process is of crucial importance to the Indian people.

A few years later, the late Senator Ted Stevens amended this Act to prevent the BIE from providing funds to Indian schools in Alaska as the matter of federally recognized Tribes in our state had not yet been resolved by the Courts. As noted in the recent opinion of Alaska Attorney General Jahna Lindemuth, the Courts have now made it clear that Alaska does have over 200 federally recognized Tribes. I call upon our Congressional delegation to amend the ISDEAA to allow BIE to recognize and help fund tribal schools in Alaska.

To make lasting improvements in our public education system is a tall order but it is not beyond our reach. Let’s not waste the hurt of decades of failure, but redeem it into a meaningful, transformational change of education delivery.

The greatest teacher a child ever has is the one who communicates beyond knowledge, at a heart level – that the child is known, loved and safe. And until this occurs, we begin at no beginning and we work to no end. These teachers best come from the people and the culture, and understand that their life is a living curriculum to the child, that education is best delivered not merely within the structured hierarchy of facts, but through relationship and storytelling that embeds within knowledge a deeper life meaning the child will ever carry with them. Our First Alaskans are an Ancient people, who view education not in the context of grade school and advanced degrees, but through the cultural lens of millennia. If we truly believe Education should be culturally responsive, then we should do all we can to see that the culture brings the education. It will then be owned in the strongest sense of the word. We can only imagine the transformation!

What if we fail? We already did that. What if we succeed? Hallelujah! Tribes will certainly do no worse than the mess we are in now and we have every reason to believe they will do it much better. Alaska is no stronger and more beautiful than when we come together as one to overcome our greatest obstacles. Surely, seeing that every student across our state has equal opportunities to learn and succeed is a rallying cry.