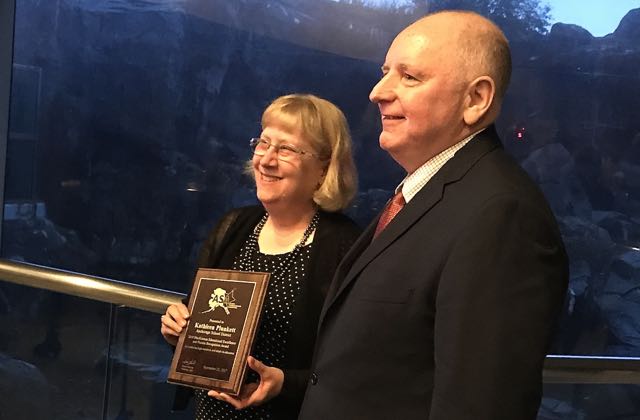 Kathleen Plunkett is presented with the award by John Conwell, Superintendant of Unalaska School District and Charman of the MacKinnon Award Selection Comittee

Kathleen Plunkett, Anchorage school board member and member of the AASB Board of Directors, has received the MacKinnon Educational Excellence and Human Recognition Award. The award was presented by John Conwell, Superintendant of Unalaska School District during the annual summer meeting of the Alaska Superintendents Association held in Seward.

The MacKinnon Educational Excellence and Human Recognition Award was established in 1985 to recognize Don MacKinnon and his service to education in Alaska.

In honor of his work to forge professional relationships on behalf of Alaska’s young people, the AASA Board of Directors established this award to be given to school board members who have provided meritorious service to their school districts and communities.