Meeting minutes record what is DONE, not what is SAID 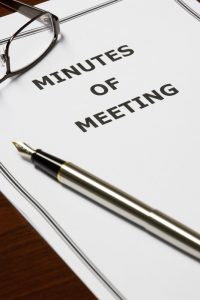 The Town of Groton, Connecticut had an interesting kerfuffle this winter, when the Town Council voted to remove a statement from the November 14, 2017 minutes. In our view, the statement should never have been included in the first place.

The news report states that the former Groton mayor criticized the all-Democratic Town Council for amending the written record of a council meeting, which occurred before the current council took office, to remove a statement praising a Republic State Senator. Questions were raised about whether this action was proper.

The basic rule under Robert’s Rules of Order is that minutes are a record of what was DONE at a meeting, not what was SAID. Personal comments have no place in the minutes. If the council had passed a resolution thanking the individual for the contributions made, that would, of course, be included, but in our view, the remarks cited did not belong in the minutes in the first place.

Read our blog post, “Detailed minutes put your board at risk,” for the reasons why including remarks in the meeting minutes is a bad idea.

A body has the power to correct its minutes, even if those who make up the body were not present at the meeting of which the minutes in question are a record. So the fact that the people now on the council were not serving at the time is irrelevant. See our blog entry, “Approving minutes if you were absent.”

Bottom line: Don’t put “he said, she said” in the minutes of your school board meetings! Read our blog posts on minutes for more information on this critical topic. Our paper “Guidelines for Meeting Minutes in Local Government” is forthcoming.