What Does Alaska’s Constitution Say About Education? 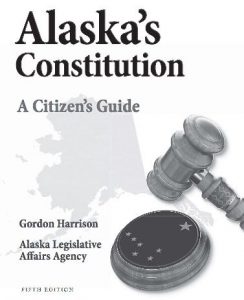 Alaskans are currently engaged in an essential and wide-ranging public discussion about how our state’s public education system will operate in the future.

As topics such as distance delivery, flexible scheduling, indigenous learning styles, career and technical training, and tribal compacting shape today’s debate, it’s worth taking a look back at some key moments in the history of Alaska’s education system, within the context of the State Constitution.

The following excerpt is from Alaska’s Constitution, A Citizen’s Guide by Gordon Harrison.

This article is the shortest in the constitution, and at the time it was written, it was the least controversial. It directs the legislature to establish a unified school system open to all children of the state; it establishes the University of Alaska; and it affirms the power of the legislature to provide for public health and welfare.

Few other constitutions have an article corresponding to this one. Most devote an article just to education. Providing for the public health, safety, welfare, and morals is the essence of the state’s police powers, which are an inherent attribute of state sovereignty. If reference is made to these matters in a state constitution, it is usually in the context of an enumeration of the powers of the legislature.

Virtually all state constitutions summon the legislature to provide free public education. Many contain the following provision, or a close variation of it: “The legislature shall provide a thorough and efficient system of free schools, whereby all children of this state may receive a good common school education.” Constitutions have long prohibited public money from being used to support religious or sectarian schools. In Alaska, the Territorial Organic Act of 1912 stated: “Nor shall any public money be appropriated by the Territory or any municipal corporation therein for the support or benefit of any sectarian, denominational, or private school, or any school, not under the exclusive control of the government.”

This section acknowledges state responsibility for education, but it is silent on how schools are to be organized and operated. From deliberations at the constitutional convention, and from Article X, it is clear that traditional local school districts were to have control of these matters under the fiscal supervision of a city or borough.

At the time of statehood, a dual system of public education existed in Alaska. Municipal and territorial schools served the urban population, and federal Bureau of Indian Affairs (BIA) schools served the Native population in rural communities. Although the territorial legislature sought to unify this dual system, the lack of money slowed progress. By adopting this section in the state constitution, the people of Alaska affirmed the goal of having a single, statewide school system. Three decades later, this goal was accomplished, thanks largely to public revenues from North Slope oil fields. However, supplanting BIA schools with state-funded schools in a state-run system did not result in uniformity of educational quality and educational opportunity for all Alaska students. Representatives of rural schools repeatedly sued the state to bring their schools closer to parity with urban schools. The first of three notable cases in this regard was Molly Hootch.

The Molly Hootch case (Hootch v. Alaska State-Operated School System, 536 P.2d 793, 1975) was brought in 1972 on behalf of a group of Alaska Native schoolchildren to compel the state to build and operate secondary schools in the villages. Lawyers for these students argued that a school system which forced children to leave family and home for boarding schools in a distant, strange and frequently hostile environment was not one really “open to all children of the state” as contemplated by Section 1 of this article. The suit also claimed that the lack of local secondary schools in the villages amounted to racial discrimination and denial of equal protection of the laws under Article I of the Alaska Constitution and the Fourteenth Amendment of the U.S. Constitution. After lengthy litigation (the state supreme court rejected the claims based on Section 1 of this article, and the other claims were never fully adjudicated), an out-of-court settlement was reached in 1976 which obligated the state to build and operate primary and secondary schools in many rural villages. The settlement (consent decree) is discussed in Tobeluk v. Lind, 589 P.2d 873, 1979.

A second suit against the state on behalf of rural schools alleged that the different methods of capital funding for urban and rural schools discriminated against the latter. School districts within a city or borough with a sufficient property tax base can, at their discretion, sell bonds for school construction and, under a state reimbursement program, recapture 70 percent of their bond debt payments from the state. Rural school districts without much local property to tax cannot participate in this school debt retirement program. They must obtain their school facilities by direct appropriations from the legislature. In 1997, a coalition of parents, rural school districts, and an advocacy group sued the state on the grounds that this method of financing schools was arbitrary and unfair, and resulted in many substandard rural school facilities. They alleged violations of Section 1 of this article, the equal protection clause of Article I, Section 1, and the federal civil rights law. A superior court agreed with the plaintiffs that the history and practice of capital funding for schools fell short of the state’s constitutional obligations in Section 1 (Kasayulie v. State, Superior Court Case no. 3AN-97-3782 Civil). After a delay of a decade caused by a secondary issue, the state settled the case by agreeing to Health, Education and Welfare fund several specific rural school projects and to adopt a more equitable method for funding schools in the rural districts.

The Kasayulie plaintiffs sued because they were excluded from the state school debt retirement program and had to depend on the uncertain and seemingly arbitrary process of obtaining direct appropriations from the legislature. The Matanuska-Susitna Borough also sued the state over the method of school funding, but here the municipality complained that it had to pay 30 percent of the cost of a new school under the debt retirement program, in contrast to rural districts that did not have to pay anything for their schools (when they got them). They said that this amounted to a constitutional violation of the equal protection clause of the state constitution. The Alaska Supreme Court disagreed (Matanuska-Susitna Borough v. State, 931 P.2d 391, 1997).

In 2004, a third suit alleging state neglect of rural schools was brought on behalf of several rural districts where students were faring poorly. The plaintiffs argued that the failure of the state to intervene effectively to improve these academically underperforming schools amounted to an abrogation of its constitutional duty under this section. A superior court agreed (Moore v. State, Case No. 3AN-04- 9756 CI), and in 2012 the state settled the case by pledging corrective action.

On several occasions, the courts have been called on to decide whether state funds are being used in violation of the last sentence of this section, which prohibits the state from spending public money for the “direct benefit” of religious and other private schools. Indeed, a dispute over this issue was an early constitutional question to come before the new state supreme court. It involved the provision of free public transportation for pupils attending private schools, authorized by a territorial law adopted in 1955. On the basis of this section, the court in 1961 declared the practice unconstitutional (Matthews v. Quinton, 362 P.2d 932, 1961).

The Quinton decision notwithstanding, the legislature later adopted AS 14.09.020, a law that reimbursed school districts for providing free public transportation to nonpublic school pupils who live along routes generally served by the public school transportation system. In 1993, the Department of Education cut off state funds for this service on the grounds that it was unconstitutional under the Quinton decision. Parents of students in the Fairbanks area sued, and the superior court upheld AS 14.09.020 stating that, under the legal analysis in Sheldon Jackson College (see below), pupil transportation constituted indirect aid to nonpublic schools and therefore did not violate the direct-benefit provision of this section (Ten Eyck v. State, Superior Court Case no. 4FA-93-2135 Civil).

Another “direct benefit” case involved a state grant program that gave Alaska residents attending private colleges in Alaska the difference between the tuition charged at their college and that charged by the state university. Opponents of the program claimed that it benefited the private schools directly, although technically the grant was made to the student. To quiet the controversy, which was then in the courts, the legislature placed a constitutional amendment on the general election ballot in 1976 that would have expressly permitted the tuition grants. The voters rejected the proposal by a large margin. Lawsuits resumed, and the court declared that the grants violated the “direct benefit” clause of Section 1 because “the student is merely a conduit for the transmission of state funds to private colleges . . . .” (Sheldon Jackson College v. State, 599 P.2d 127, 1979).

To learn more, the fifth edition of Alaska’s Constitution, A Citizen’s Guide is available as a free download from the Alaska Legislative Affairs Agency website.