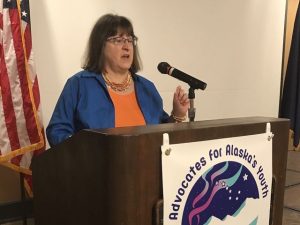 I’m a proud member of the Alaska House Majority Coalition which is the only caucus in the 30th Legislature to have approved a complete and sustainable fiscal plan. I am very disappointed that the Senate cannot see it the same way we do. We are committed to supporting the youngest Alaskans, so they are well-equipped to meet their future. To that end, members of our caucus are carrying the following bills.

House Bill 287 was to provide for full (although flat!) and early funding of K12 education, including pupil transportation and Mt Edgecumbe HS. Regarding the failure of the House to pass HB287 on February 7, with the CBR appropriations language, it failed on a 21-16 vote and thus failed to garner the ¾ necessary to tap the CBR. Getting a 3/4 vote would have gotten us out of here in 90 days and funded education on time, by removing K12 funding from the political end game.

Some K12 Money is appropriated in the version of HB 287 that passed the House on February 7 on a vote of 33-3 with 4 excused:

Section 1 provides about $51 million (from various fund sources) for the educational programs listed, and Section 4 appropriates (from the statutory budget reserve fund–the SBR) the amount necessary to fund pupil transportation. The SBR contains about $172 million, which is more than sufficient to fund the $78 million projected cost.

Failure of the ¾ vote required to appropriate money from the CBR means the K-12 foundation program ($1.2 billion) is not funded.

The CBR funding is NOT automatically replaced with general funds upon failure of the supermajority vote–the formula is simply not funded.

For funding to be restored, the Senate will need to add a funding source to the bill.  The Senate could include CBR funds as the bill sponsor proposed, or they could use another fund source.

HB287 only authorizes early funding for one year. Senator Stevens’s SB 131 which would place the separate appropriation for education funding in statute and establish a date by which the bill must be passed each year.

HB 339, An Act relating to the base student allocation, by Rep Les Gara, will be heard in HEd on Friday, February 16. Bill seeks to increase the base student allocation of $5,930 by $100 to $6,030. We took public testimony in advance yesterday in House Education. Thanks so much to all of you who testified on the erosion of the BSA and its impact on your schools. The testimony of your students was especially poignant.

HB 213 is Rep Justin Parish’s bill that restructures the Public School Trust fund by combining what are now separate accounts and using a percent of market value (POMV) draw of 4.75% of the fund value.  The value will be based upon the monthly average market value of the fund for the previous ten fiscal years at June 30.  This structure would allow for a higher rate of return and more stable funding in support of the state’s public schools.

The change to investment was recommended by the House Finance subcommittee for the Department of Education and Early Development.  With this change, the Department of Revenue has estimated an additional $8.2 million annual return, that’s new money available for education funding.  No additional administration or investment costs would be incurred as a result of this bill. I would appreciate your support for HB 213.

Alaska remains one of the only states that does not provide pre-kindergarten education to all of its children on a statewide basis. Out of about 9700 four-year-olds statewide, Alaska provides preschool services to about 1700, or about 18%, between Parents as Teachers, Best Beginnings, state-funded preschool and federally subsidized Head Start. HB 52 seeks to add Alaska to the ranks of the majority of states that have recognized the need to invest in our children’s future properly.

Rep Ivy Spohnholz, Chair of Health and Social Services and I as Chair of Education will be looking at both DEED and HSS in early March, reviewing the birth to age five investments to see how we can be sure to focus on preschoolers and make sure they are prepared for the investment we will make at the beginning of kindergarten.

Tomorrow on the House floor is my bill to change the name of the teen dating violence prevention component of the Alaska Safe Children’s Act to Bree’s Law, HB 214. Bree Moore was the 20-year-old woman who was murdered by her boyfriend in a senseless act of violence. Her parents, Butch and Cindy Moore, have been on a quest to educate all of Alaska’s teens so that they can identify danger signs in relationships and save lives. In the two years since this became law, the number of teens identifying potential teen dating violence in their relationships has dropped from about 10% to about 5%. HB 214 should pass comfortably as it has 26 cosponsors. And that number grows every day.

At no cost to the public, HB64 establishes a fifteen member task force on Reading Proficiency Task Force with the goal of increasing statewide reading proficiency scores within three years. Approximately 47,000 students in Alaska did not meet state standards in 2015. Students who cannot read by third grade are four times more likely to drop out of school than those who can read. More than $60 billion is lost annually in American business productivity due to a lack of basic reading skills. These statistics are unacceptable, and we must identify evidence-based approaches to helping students read.

Thank you for coming to Juneau, for speaking on behalf of Alaska’s students and parents, and for all you do to educate and support Alaska’s children.