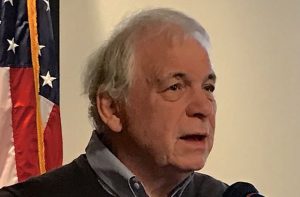 Author Clive Thomas provided Fly-In attendees with his take on how Alaska’s fiscal gap can be fixed, and the political, social, and economic factors required to be successful. Mr. Thomas’ presentation drew upon his 35 years of experience teaching political science at the University of Alaska in Juneau and from his book, Alaska Politics and Public Policy, which focuses on how beliefs, institutions, personalities, and power have shaped our state’s political system and policies.

In describing the current political deadlock over the state budget, Thomas drew from the state’s economic and political history to explain its impact on Alaska’s education system.

Alaska’s income is 75% dependent on oil, said Thomas. As a result, the state economy is unlikely to become diversified in our lifetimes, he said. Industries, such as fishing, tourism, mining, and timber combined account for less than 3% of the state’s revenue. The reality, Thomas said, is that oil fuels government and the revenue gap caused by low oil prices will be almost impossible to fill since no other industries generate the amount of revenue that oil does.

A revenue source that could help fill this gap said Thomas, would be a combination of various taxes. He cited examples such as doubling the gasoline tax or imposing sales and personal income taxes. However, these taxes combined with all other industry revenue sources would only amount to about 30% of Alaska’s budget needs, so there’s a long way to go to make up the difference.

“The only thing to do is to use earnings from the Permanent Fund because there’s no other money,” Thomas said. He told attendees he believes the major task in Alaska politics is “to sever the relationship between oil prices and the state budget. Unless you sever that relationship, nothing will ever change.”

Using Permanent Fund earnings, along with a combination of taxes and other revenue sources, would take time to institute but is the only solution that could adequately address Alaska’s fiscal gap, he said. Accomplishing this goal would require bi-partisan cooperation to develop a long-term fiscal plan that incorporates multiple revenue sources, but political realities would likely get in the way of that happening.

Thomas identified four things that could impede the creation of a long-term fiscal plan:

1. A “strong force” among Alaska’s population to not touch the Permanent Fund, especially the dividend program. “Today’s privileges are tomorrow’s demands,” said Thomas. “The PFD program is probably the most popular piece of public policy in the entire world, not just in the United States, because people get free money,” he said. “It becomes a right, and it builds up a constituency.”

2. A political ideology whose proponents believe the government should be run like a business. “But you can’t,” Thomas said. “In business, there’s a very clear objective: to produce as much as you can to make as much profit as you can. There’s nothing complicated about that,” he said. “So what is the goal of government?” he asked. “Many people view government based on their values: what you like and don’t like, what you think is right,” Thomas said. “It’s ideological, and that ideology produces all the conflicts in government.”

3. Those who believe oil prices will rise enough to close the budget gap so we won’t have to impose taxes or use Permanent fund earnings, which Thomas calls ‘The Hope Syndrome.’ “This does not solve the problem, it just creates another one down the road,” he said. “Prices may go up, but how do you know they will next time? You don’t know. They may not.”

4. Those who say that before any new taxes are imposed, the government needs to be cut further to make it more efficient. “That’s possible,” says Thomas, “but you get to a point where you injure the state. Oil fuels government and government fuels a lot of the economy,” he said. “With a third of the people in this state working for the government, when you start cutting them back you have serious problems.”

Thomas said state workers have a “multiplier effect” on the economy by purchasing goods and services that, in turn, support local businesses and job growth. Cutting government too much can cause a “de-accelerator effect” by removing money from the economy, causing job losses and business closures.

“What’s going to happen this year I don’t know, but it’s getting pretty serious,” said Thomas of Alaska’s fiscal situation. “There’s only about two-and-a-half to three billion left in the Constitutional Budget Reserve, and the deficit is about three-and-a-half to four billion,” he said.

“If something doesn’t happen, a lot of the people who work for your school district are going to be out of work,” said Thomas. “The kids are going to have larger class sizes, and they’re probably not going to have programs that make them a rounded person,” such as music and sports, he said.

Thomas stressed the need for the state to develop a long-range fiscal plan that clearly identifies revenues and expenditures, so that school boards can plan ahead and not have to worry about laying off teachers and cutting programs each year.

“In politics the strongest force is inertia,” said Thomas. “Doing nothing is easiest, and it’s also the thing that’s easiest to control. By digging your heels in, things don’t happen,” he said. “To get something to happen, you’ve got to put all these bits and pieces together to get over all these hurdles.”