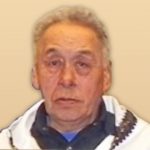 On May 9, Governor Bill Walker ordered all state flags be lowered in honor of former Representative Moses Paukan, Sr., who passed away on Sunday, April 16.

“Representative Paukan was a respected leader and representative,” Governor Walker said. “His service both in the legislature and throughout his community showed the commitment and dedication of a true public servant. Lt. Governor Mallott and I extend our sincerest condolences to Rep. Paukan’s family, and those across the state who knew and admired him.”

Representative Paukan served in the Alaska Legislature from 1967-1970. He was the Mayor of St. Mary’s when he was appointed by Gov. Walter J. Hickel to replace the late Rep. John L. Westdahl in the State House in 1967.

In the early 1970’s, he became involved with other entities in his community and region, serving as president of the St. Mary’s Native Corporation, president of the Association of Village Council Presidents, on the Calista Corporation Board of Directors, Algaaciq Tribal Government, AVCP Housing, and as mayor of St. Mary’s at various times throughout his local political life.

He operated his own businesses—Paukan’s Cash and Carry merchandise, a pool hall, Paukan Taxi Service, 8M’s Grocery Store—and was the AVEC Power Plant Operator for 47 years. He worked as the St. Mary’s Native Corporation Store Manager and the AC Company manager.

In 2005, he was elected and served as a School Board member for over ten years. He was a lifetime member for the AVCP Regional Housing Authority and served until his death.

Moses Paukan Sr. was a family man first before anything else in his political life. He lived a traditional lifestyle that included subsistence fishing, hunting, commercial fishing, and traditional Yup’ik singing and dancing.