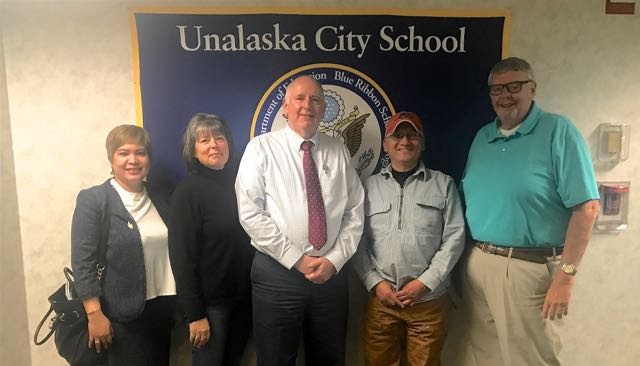 The Unalaska City School Board is delighted Mr. Conwell has received this recognition from his peers. It validates what the Board and community has known all along – John is a dedicated professional committed to the district and his colleagues, but most importantly he truly cares about the education, success and well being of each child in Unalaska.

Superintendent Conwell has committed decades of service to the Unalaska City School District, serving ten years as Assistant Principal and Principal for Unalaska High School and is currently in his eleventh year as the district’s Superintendent. His longevity of service demonstrates an unwavering commitment to the students of Unalaska and a determination to see them succeed. Through selfless leadership, Mr. Conwell has gained the trust and respect of both students and colleagues, and continues to serve as an inspiration to educators throughout Alaska.

Dr. Michael Johnson, Commissioner of Education shared, “It is encouraging to see the Alaska Superintendents Association recognize leaders like John Conwell. The Unalaska City School District is one of the highest performing in our state, with a graduation rate of 96.6%. John’s leadership has supported students pre-kindergarten through post-secondary education. It is a privilege and honor to work alongside John.”

Superintendent Jack Walsh of Craig City School District had this to say about Mr. Conwell, “…he has regularly offered support, encouragement, and assistance to me and he has never hesitated to share information that might help staff and my students in another district. Mr. John Conwell has the vision of a true leader and the selfless nature to know that if he can help improve conditions for any student or district in Alaska, he will do it.”

Sean Dusek, ASA President and Superintendent of the Kenai Peninsula Borough School District stated, “I am very proud that John Conwell is the Alaska Superintendent Association’s Superintendent of the Year! He has dedicated his life to education and has been an extremely successful leader in Unalaska for many years. John is steady, thoughtful and an excellent leader. He has improved public education state-wide and has been a voice of wisdom that our state leaders listen to and seek out for advice. Congratulations John, this is a very well-deserved award!”

Under Superintendent Conwell’s leadership, Unalaska High School is a 2011 Blue Ribbon award-winning school and Eagle’s View Elementary was a 2013 Blue Ribbon Finalist. Unalaska is viewed as a leader in the state based upon a lengthy record of student academic success. With a significant number of the student population being ESL and needing additional support, Mr. Conwell has worked to create several programs including an RTI program, ESL program, and professional development designed specifically to provide support for the needs of all students.

Mr. Conwell’s gift of bringing the community together has resulted in one of the most connected communities in Alaska. He has connected Unalaska’s city council, mayor, the Qawalangin Tribe, the Ounalashka Corporation, and the local business community together to rally in support of their schools.

Superintendent Conwell’s sphere of influence does not, however, stop within Unalaska, nor does his advocacy on behalf of the school district end within the community. Mr. Conwell is no stranger to the halls of the State Capitol building in Juneau, regularly educating the Legislature on behalf of the interests of students and teachers across the state.

Mr. Conwell is considered a mentor to many and his constant encouragement has sustained many educators along their path. Some have even discovered their own passion for teaching through even the briefest contact. Sami King, a teacher at Palmer High School, tells her story of a brief encounter with Mr. Conwell when he visited her high school class in Montana. “His passion for teaching and Alaska opened a door for me, which I had no idea existed…Still, well over 20 years later, I remember very clearly the passion and excitement as he spoke. That day, listening to Mr. Conwell speak gave my future focus. I am just finishing my 19th year teaching in Alaska. It was his passion for education and Alaska that opened that door for me.”

ASA will advance Superintendent Conwell’s candidacy to the 2018 National Superintendent of the Year program knowing that he is highly respected by his colleagues, board members and constituents throughout Alaska. All State Superintendents of the Year will be honored in February at the 2018 AASA National Conference on Education in Nashville, Tennessee.