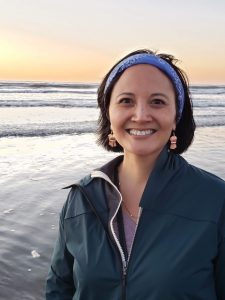 Content provided to the AASB by Gloria Wolfe of Yakutat, Ben K’uyáang Young of Hydaburg, and Mary Daaljini Folletti of Juneau and composed by Lisa X’unyeil Worl.

Cultural Integration, or teaching through culture, can be approached a variety of ways as noted in our newsletter topic.  In March, while many communities were in Juneau for the Goldmedal basketball tournament, three STEPS community preschools got together for the first time at Tlingit & Haida’s Vocational Technical Resource Center.  Their two-day meeting included some Child Development Association training provided by the Assocaition for the Education of Young Children as well as time to meet and to learn from one another.

While the daily schedules vary, each immersion preschool is committed to developing the language proficiency of the teachers and assistant teachers into advanced levels of fluency and to growing first-language speakers in children and grandchildren.  Each program also draws heavily on support from their tribe, elders and other Tlingit & Haida speakers, and family participation.

We asked Ben K’uyáang Young of Hydaburg, Gloria Wolfe of Yakutat, and Mary Daaljini Folletti of Juneau to answer a few questions about their immersion preschools.  The following are their responses.

How many students are participating in your Language Nest?

Gloria:  We have 19 students in our Language Nest program.

K’uyáang:  We have 21 enrolled students in the preschool/kindergarten program.

What were some of the partnerships and efforts that made this school possible?

Gloria:  Our partnership with the Administration for Native American (ANA) and the Tlingit and Haida Headstart program have been the two most instrumental entities to our Language Nest. We also have great partnerships with the Kake Tribe, Yakutat Community Health Center, ANB/ANS Camp 13, the Mount Saint Elias Dancers and Sealaska Heritage.

K’uyáang:  The City of Hydaburg donated the use of the building for the preschool/kindergarten building.

What were some of the biggest challenges you faced in establishing the Nest?

Gloria:  Finding the unique combination of people who are willing to become highly proficient in the Tlingit language and willing to teach.

Mary: Getting licensed through the state to become a child care center, including working with the city and fire marshal.  Finding enough staff who have enough language skills as well as teaching skills to work in the facility.

K’uyáang:  Some of the biggest challenges we faced while establishing the school was renovating the building, teaching the staff enough Xaad Kil to communicate effectively with the children, and creating a schedule and layout that would work for the children.

What does a day in the Language Nest look like?

Gloria:  We focus a lot on cultural identity. Most of the day is asking the students to self identify based on their clan and doing activities with their clan members to learn about at.oow, reciprocity, and respect. We do art, songs, stories and focused station learning.

K’uyáang:  The children are greeted by the lead teacher, Benjamin Young, on the porch of the school. They are asked in Haida if they are ready to learn and their parents are asked if their children are ready to learn. Once the readiness is established they are welcomed inside the building to remove their shoes and coats. They morning is started in a side room with a “Greeting the Day” song, a prayer and some structured teaching of phrases, words of the day, number of the day and letter of the day time. After the morning lesson is complete the children are served a snack and allowed time for free play. The day continues with stations of reading, puzzles, playdough, writing, and sand table. After stations the children have time for Physical Activity where they play on slides, boats, “shoot hoops” and run around. The next activity consists of Haida song and dance. After singing and dancing the children are served lunch and have another time for “free play.” The afternoon consists of one more set of stations, a competitive game time and a goodbye song.

What could the community do to support Language Nest students in their learning?

Gloria:  Encourage the students by learning the language and making them feel comfortable sharing what they know outside of the classroom.

Many students don’t completely understand that Tlingit is a different language that isn’t known by everyone, and they will identify nouns or say phrases outside of the classroom. If the students are able to say the phrases comfortably in the community they will feel confident to carry the language with them wherever they go and it lives in the community and not just in the classroom. To accomplish this, people in the community need to start accepting that Tlingit will be playing a bigger part in the vocabulary of the youth, and to be a part of that movement, all ages should start to speak the language to some capacity. ​

Mary:  Speak to them in Lingit or Xaad Kil.  Donate snacks and supplies.  Respect the boundaries put in place by the instructors.  Open up discussion about what will happen with our students after they leave the language nest; i.e. immersion K-12.  Help participate in fundraisers.

K’uyáang:  The community has been amazing in supporting the preschool. They have been donating culturally appropriate foods for snack time. The biggest things the parents and community could do to support the preschool is to send the kids ready to learn, begin to learn the language, and encourage the children to speak what they know. We are teaching and speaking to these children 4 hours a day in Xaad kil, they know more then you could imagine. They just need to be encouraged and praised for speaking the language.  Also, the community can make it commonplace to use the language at social functions and everyday interactions.